Linus Lundqvist lived through a raft of sensations on his street circuit debut at the Grand Prix de Pau this weekend – and was ultimately tossed between hope and despair as he battled for the podium in an action-fuelled finale.

Round two of the 2019 Euroformula Open campaign took Lundqvist to the south of France for a first taste of the demanding Pau street track, and – despite brushing the wall in Friday free practice – the reigning British F3 champion kept it together nicely to finish his first-ever street race a solid fifth from eighth on the grid in the opening heat on Saturday.

“I think the first race was alright by all means,” says Linus Lundqvist. “We were not quite there in qualifying and had to start from the midfield, and it’s very hard to overtake around here for obvious reasons, but I tried to put the guys ahead under as much pressure as I could. Eventually it paid off and I could capitalise on their mistakes. For my first-ever street race, I’m quite pleased with the way I drove.”

For the final race of the meeting on Sunday – carrying the official “Grand Prix de Pau” banner – Lundqvist lined up ninth in his Double R Racing Dallara due in part to another barrier strike in the morning’s qualifying session. To add to the complexity of an already significant challenge, the heavens opened just minutes before the start, leaving teams and drivers sitting on the fence in their choice between slick or wet-weather tyres.

Like the majority of the field, Lundqvist ultimately decided to remain on slicks for the start of the race, but – as the rain continued to fall – it became increasingly clear that wets was the way to go. 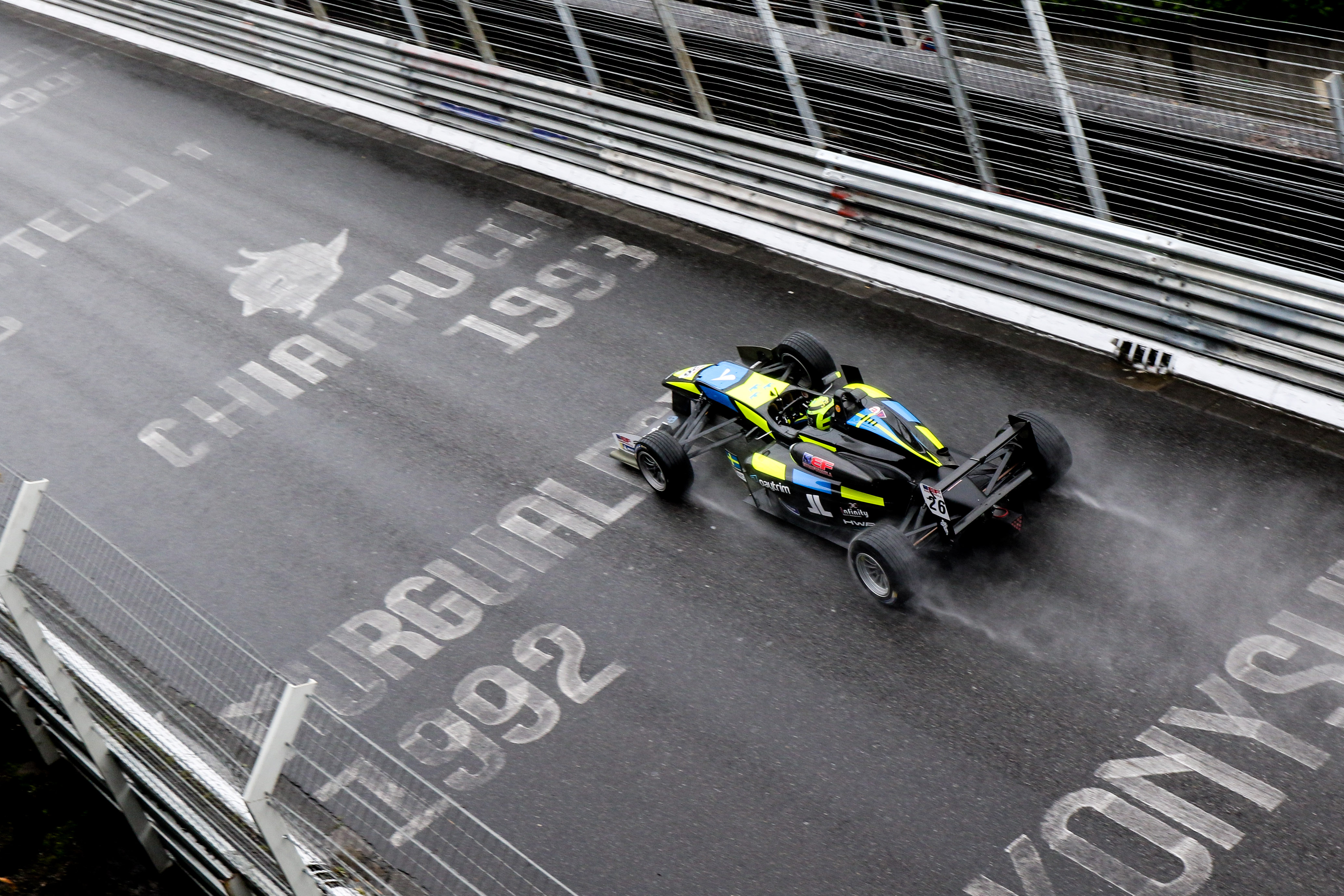 Deciding to pit for a change of Michelin rubber at the halfway point, Lundqvist was swiftly turned around by the Double R Racing crew, who skillfully overcame the fact that pitstops are normally a rare commodity in Euroformula Open / F3 races.

Shod with wet-weather tyres, Lundqvist set a rapid pace around the slippery streets as he traded fastest laps with Teo Martin’s Lukas Dunner, finding himself up in fifth place after the safety car was called following a clash between leading Motopark team-mates Liam Lawson and Julian Hanses.

At the restart, Lundqvist immediately sped past Aldo Festante (Teo Martin) to snatch fourth at the Pont Oscar hairpin, going on to instantly attack Fortec’s Cameron Das for the final podium position at the next corner.

Lunging down the inside of Das into the sharp Lycée right-hander, however, Lundqvist misjudged the move, running out of track on the exit and sliding into the barriers. The Swede retired at the spot.

“I am massively upset with myself for throwing away that potential podium position, and I really expect more of myself than something like that,” Lundqvist concedes. “It was a silly mistake on my part and I really want to apologise to the team. I should have waited for a better place to make that move, but hindsight is a wonderful thing… Anyway, I will learn from it – that’s for sure. All in all, it’s been great fun pushing the limits around this place this weekend and I leave Pau with many new experiences – good and bad – to digest.”

Linus Lundqvist and his fellow rivals will be back on track in just a few days, as Euroformula Open moves on to Germany and the Hockenheim GP track this coming weekend.