Linus Lundqvist on site in Florida as Daytona testing begins

Linus Lundqvist has started off the new year in top gear by travelling to Florida, USA, to take part in three days of official pre-event testing ahead of this month’s Daytona 24 Hours.

The Swedish racer was awarded a fully financed drive in the legendary American sportscar race courtesy of the Sunoco Whelen Challenge initiative, which he won as part of a highly successful 2018 campaign which also netted him the BRDC British Formula 3 championship title.

Formally named the Rolex 24 At Daytona, the twice-around-the-clock race is staged on January 26-27, but preparations are getting underway in earnest already this weekend during three days of on-site testing known as the Roar Before the Rolex 24.

The Roar will hand Lundqvist his first-ever taste of the daunting Daytona International Speedway, as well as his first acquaintance with the Lamborghini Huracán Evo GT3 he is set to drive for Precision Performance Motorsports (PPM) in the GTD class.

“It’s a big thing to be here,” says Linus Lundqvist upon arrival at the venue. “Daytona is such an historic motorsport site and it’s only really now that it’s actually sinking in that I’ll be doing this. I’m so thrilled and I can’t think of a better way to kick-start 2019!” 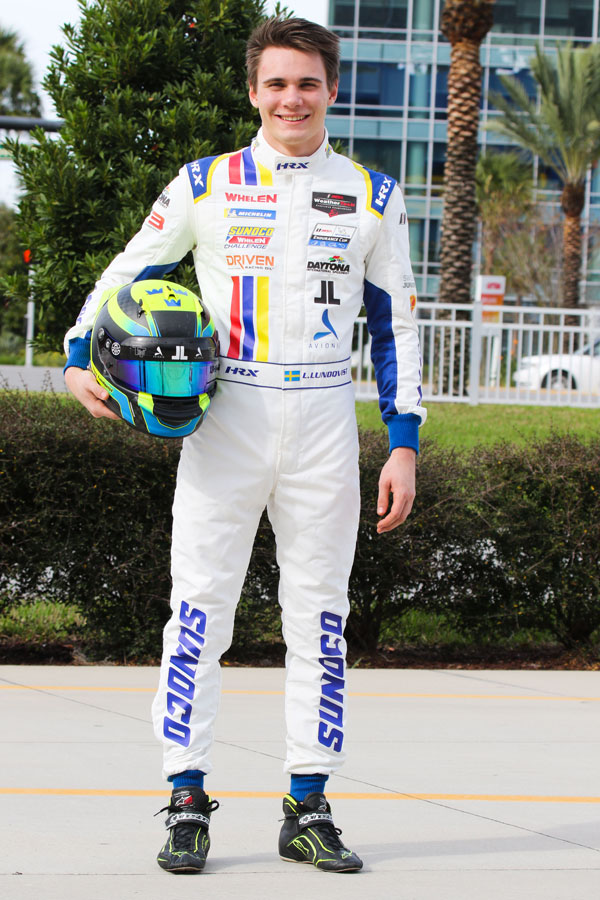 Lundqvist, who will share the PPM Lamborghini with co-drivers Steve Dunn, Brandon Gdovic and Don Yount, paid his first visit to the Daytona International Speedway on Thursday, taking in the unique atmosphere offered by the “World Center of Racing” and enjoying a tour of the venue’s impressive museum.

“I’ve spent some time at the track, getting to know the team and learning the place,” Lundqvist continues. “It’s all good so far, but of course there are many new impressions to take in. Everything is new to me; the car, the team, the track, the format, driving at night… I’ve never shared a car with anyone before and the races in British F3 were about 20 minutes long – here, we’re looking at stints of up to two hours. The test this weekend will be very important for me.”

The Roar Before the Rolex 24 spans across Friday, Saturday and Sunday, offering a total of seven sessions (plus a short qualifying foretaste in which pit garage order for the up-coming race is at stake).

The test boasts a total of 47 entered cars, divided into four different classes. The GTD category, in which PPM and Lundqvist will compete, is the biggest one – featuring 23 of the total entries.

For the second consecutive year, double Formula 1 world champion Fernando Alonso is among the headline names on the star-studded entry list, the Spaniard set to drive a Wayne Taylor Racing Cadillac in the DPi prototype class.

“This whole thing is just so cool,” Linus Lundqvist concludes. “Being here among these great names of motorsport, in one of the biggest races on the planet, is a dream come true. I can’t wait to hit the track tomorrow. Hopefully I will get plenty of time in the car this weekend and do a good job for the team.”

For news and reaction from Daytona, please check out the dedicated online portal set up specifically for the event at www.linuslundqvistracing.se/en/daytona-24-hours-2019/.